Former Nigerian Finance Minister, Dr Ngozi Okonjo-Iweala, has urged the Federal Government to ensure everything possible is done to bring back the over 300 schoolboys abducted from Government Science Secondary School, Kankara, Katsina State.

Okonjo-Iweala, who is the leading candidate for the job of director-general of the World Trade Organisation, also said those using the children as pawns must be held accountable. 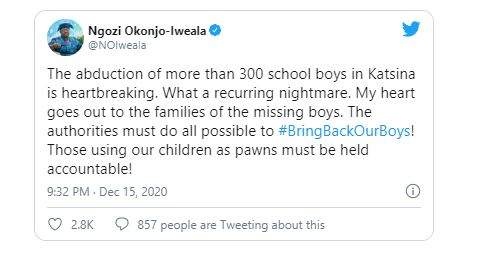 Bandits had stormed the school on Friday night and abducted the students after a gun duel with the police.

The President, Major General Muhammadu Buhari (retd.), had arrived in the state on Friday, hours before the abduction took place.

The factional leader of the Boko Haram insurgents, Abubakar Shekau has claimed responsibility for the abduction of students of Government Science Secondary School, Kankara, Katsina State.

Shekau made the claims in a new audio message first published by HumAngle.

He stated that the action was carried out to ‘promote Islam and discourage un-Islamic practices’.