They knew they needed to do something so as to look like they are capable of resolving any security issue especially the ones that have to with Kidnap in Nigeria.

On the 11th of December, news had it that Boko Haram stormed a school in Kankara, Katsina when President Buhari was in the state to kidnap over 300 schoolboys.

Recent development had it that the 344 schoolboys have been released, unhurt and unharmed.

The funniest part is, there were no gunshots, no terrorists arrested, or no ransom paid to secure the release of these boys. Na so Shekau nice reach?

Why The Whole Thing Seem Like An Unprofessional Script

The same Boko Haram Terrorists that abducted over 276 Chibok girls under Jonathan Administration in which all efforts to secure their release proved abortive. 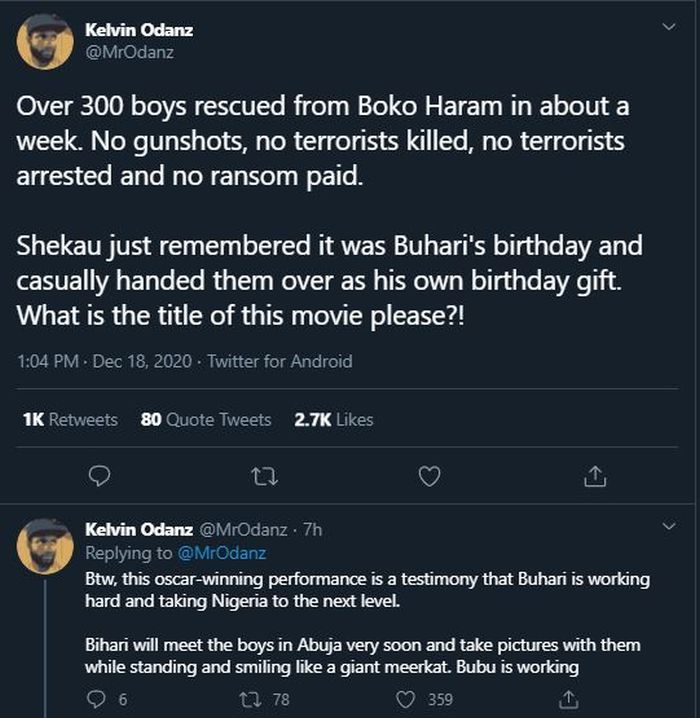 On a more serious note, why is it that it is schoolboys they kidnapped now?

Why didn’t they go to a mixed school and kidnap boys and girls?

This is just to bring about the narrative of PDP’s Goodluck Jonathan failed with abducted school girls and APC Buhari succeeded with the release of abducted schoolboys. Who are they fooling?

I have a strong feeling that APC is doing all they could, just to make Buhari and their party look like a good party ahead of the next coming election come 2023.

I’m super glad people understand their games and they are calling them out accordingly on Social media saying it’s all game.

Nigerians are smart and they know how desperate politicians are when an election is fast approaching.

This is another failed game from the APC Government, they should try and act another one.

Will They Count/Call This An Achievement? – I won’t be shocked if APC goes about adding this to their Achievements.

We know them and we know their ways. E no go shock us.

Guys, What Are Your Thoughts On This?

Do You Think This Is A Failed Script From Buhari’s Government?

The post DO YOU AGREE?? Unconditional Release Of 344 Abducted Kankara School Boys By Boko Haram Is A Big Scam From Buhari Gov’t appeared first on Naijaloaded | Nigeria’s Most Visited Music & Entertainment Website.