Medical personnel identified as Victor Israel in Rivers state whose account was reportedly frozen by the Central Bank of Nigeria for ”giving medical attention” to #EndSARS protesters in October, has cried out stating that it’s been two months since he has been denied access to his money.

In a tweet posted this morning, Victor says this is the worst Christmas for him and his family.

”Exactly 2 months & 9days after CBN froze all my bank accounts because I gave medical assistance to #EndSARS protesters in PH. All my sweat, All my savings Gone This is so far the worst Christmas for me & my Family Omo! Abeg Who get Rice to give me?” he tweeted. 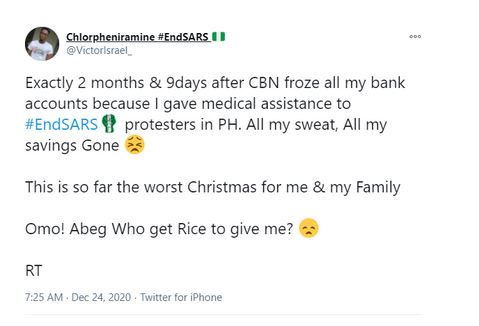 The post “This Is The Worst Christmas For Me And My Family” – Medical Personnel Whose Account Was Frozen After #EndSARS Protest Cries Out appeared first on Naijaloaded | Nigeria’s Most Visited Music & Entertainment Website.