Controversial social media commentator, Reno Omokri, has stated that luck does not exist.

The author and former presidential aide wrote via Twitter that hard work is real and not luck. He added that luck was created by lazy people to justify their laziness.

He continued that successful people are those who worked hard to achieve their success.

“Those you call lucky were working while you slept. They strategised, while you watched TV. They set goals, while you discussed football. The concept of luck does not exist. It was created by lazy people to explain why others succeed where they fail #FreeLeahSharibu #RenosNuggets” 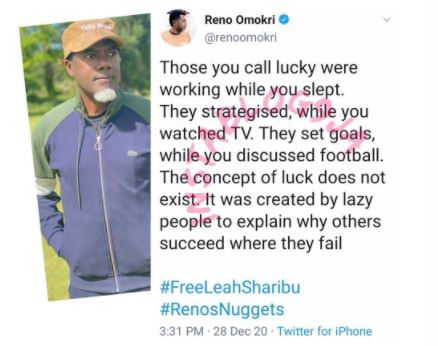 The post ‘The Concept Of Luck Does Not Exist, It Was Created By Lazy People’: Omokri appeared first on Naijaloaded | Nigeria’s Most Visited Music & Entertainment Website.