There Are Reports That Reality TV Star Kim Kardashian And Her Billionaire Rapper Husband, Kanye West Are Getting A Divorce.

According to PageSix, Kardashian and her husband’s divorce is “imminent” as she has hired divorce lawyer, Laura Wasser.

“They are keeping it low-key but they are done,” says a source.

“Kim has hired Laura Wasser and they are in settlement talks.”

The report also says the couple did not spend the yuletide season together as West remained at their Wyoming mansion.

“Kim got Kanye to go up there [Wyoming] so they could live separate lives and quietly get things sorted out to separate and divorce. She’s done,” the source continued.

The source added that while Kim has done much in the past to protect and help Kanye deal with his mental health struggles, “Now this divorce is happening because Kim has grown up a lot.

“She is serious about taking the bar exam and becoming a lawyer, she is serious about her prison reform campaign. Meanwhile, Kanye is talking about running for president and saying other crazy s–t, and she’s just had enough of it.”

It would be recalled that West called out his wife on Twitter back in July 2020, for meeting with rapper Meek Mill at the Waldorf hotel.

“They tried to fly me in with 2 doctors to 51/50. I have been trying to get divorced since Kim met Meek at the Waldorf for ‘prison reforms.’ I got 200 to go,” he tweeted.

He later deleted the tweets.

Kim later took to her Instagram page where she revealed that her husband was bipolar.

She appealed to everyone to support her family as they struggle with the music star’s illness.

This would be Kim’s third divorce.

Kim and Kanye were married in 2014 and have four children, daughter North, 7, son Saint, 5, daughter Chicago, who turns 3 next week, and son Psalm, 19 months. 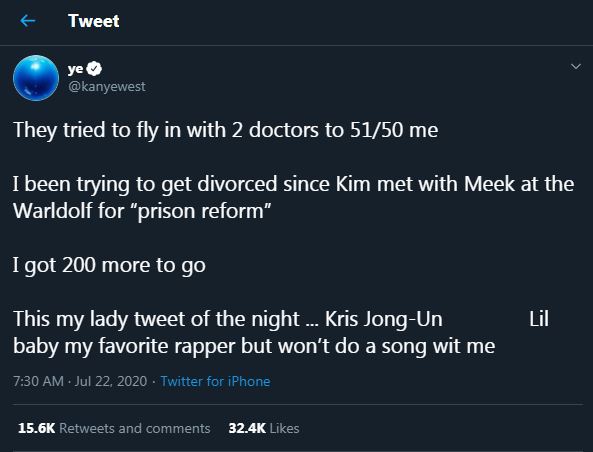 The post Kim Kardashian And Kanye West Are Reportedly Getting A Divorce appeared first on Naijaloaded | Nigeria’s Most Visited Music & Entertainment Website.